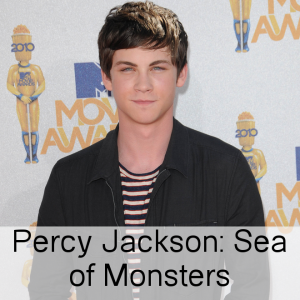 While some people are waiting in line to see Man of Steel for the umpteenth time, I will be walking into Percy Jackson: Sea of Monsters. The international best seller from Rick Riordan is getting it’s well deserved sequel after fans thought the first movie was a flop. Being a sucker for action and Logan Lerman, it’s not really a question about whether I will support this sequel.

In the first movie, we saw Percy Jackson find out that he is the son of Poseidon the God of the Sea. He went from misunderstood teenager to being the top dog at Camp Half-Blood pretty quickly. Jackson went on a quest with his Satyr friend Grover and daughter of Athena, Annabeth.

There were so many plot holes and untouched story lines from book one that fans can expect in Sea of Monsters. Most notably, the fact that the Titan ruler Kronos is making a comeback. We get to see his coffin in the new international trailer. We also see more of Luke, the traitor half-blood son of Hermes.

Speaking of the Messenger God, Nathan Fillion plays Hermes in the sequel, out August 7. Hermes’ crappy son is trying to destroy the Gods so that the Titans can come back and rule over a new kingdom. Talk about ultimate teenage rebellion.

While some things are definitely different about this second installment, it’s clear they were made for one reason: to bring you an action packed summer movie. The funniest thing is at the end of the trailer. It appears that Percy Jackson: Sea of Monsters has borrowed some animation from This Is The End and their portrayal of Satan.

Will you be seeing Percy Jackson: Sea of Monsters?