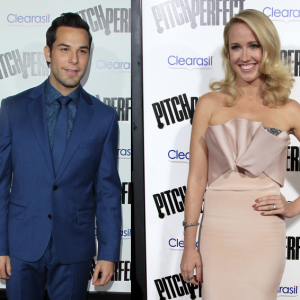 New celebrity couple alert! And this is a good one, guys. Pitch Perfect stars Skylar Astin and Anna Camp are rumored to be dating. Um, Anna, doesn’t this mean you have to leave the Barden Bellas?!

Us Weekly learned of the coupling from several sources. Astin and Camp were first seen as a couple at the 3rd Annual 24 Hour Plays Presented by Montblanc in Santa Monica, California on June 22. Skylar tweeted photos of him and Camp and their friends.

“They left together,” a source to Us. “Apparently backstage Skylar was talking about how he loved her from the first day they met.”

How cute! Of course, whether the L-word was used romantically or platonically is yet to be confirmed.

Skylar Astin and Anna camp have been buds for a while, even before Pitch Perfect. A source said they were introduced through mutual friends. Camp is currently divorcing her husband of three years, Michael Mosley. Mosely filed for divorce on April 23, citing “irreconcilable differences.”

Before she was a Barden Bella, Anna Camp was on Trueblood as the wife of an extreme Christian leader against the vampires. She will make an appearance in the June 30 episode. Camp brought Astin with her to the season premiere on June 12.

“Had the best time with the dashing Skylar Astin at last night’s True Blood premiere!” she wrote along with a pic of the two.