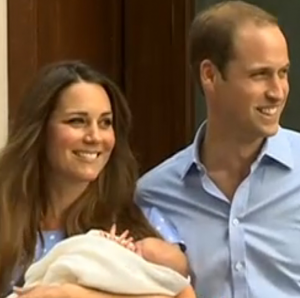 Prince William drove Kate and his son the Prince of Cambridge home from St Mary’s hospital in a Range Rover. He said his son has more hair than him. (NBC)

He’s finally arrived! After nine months of waiting, we met the Prince of Cambridge today on the steps of the Lindo Wing at St Mary’s Hospital in London. The unnamed Royal Baby was swaddled and carried out by his mother, Catherine the Duchess of Cambridge. Prince William was by his wife’s side and greeted the crowd easily. The tumultuous press meeting didn’t disturb him as much as one might think. The baby was held close and waved his fingers out of the blanket as the cameras rolled and flashed.

Kate Middleton looked radiant and fresh in a loose blue polka dot sundress by Jenny Packham. Her signature long brown hair was styled normally and she barely looked a stitch different than when she went in. The new mom’s baby bell didn’t even appear to have gone down. They parents posed for pictures and then William took his newborn son. It was a sweet moment, despite the paparazzi.

Holding his son close and looking so natural, Wills address the press lined up to greet him and Kate’s son. He and Kate both said they were enjoying the moment and didn’t have a name just yet. Royal Watchers assume that the name will be either James or George.

A reporter asked William if the baby had much hair, to which he responded, “More than hair me, thank God.” He also said his son “has a good pair of lungs” and his wife’s good looks. Kate was modest and corrected her dashing husband. She said that William had even changed a few diapers already.

After the interviews, Wills and Kate returned to the hospital to put their son in his car seat. It’s law in England that the baby must leave the hospital in a car seat and cannot be put in in the car. After that, Kate jumped into the back of a Range Rover while William tucked the baby in beside her. The Prince of Whales hopped in the front seat and drove his new family home.

He beamed and waved to the crowd as he slowly began the drive to Kensington Palace. A wing is being remodeled for the new family. Kensington Palace is where William and Harry grew up with their mother, Princess Diana.

Let happily ever after commence.