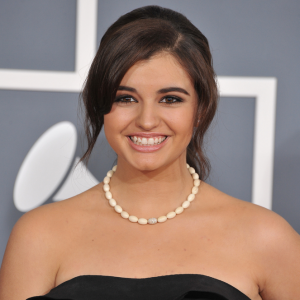 If you thought that “Friday” was the best thing that Rebecca Black could come up with, you were wrong. Black is covering Miley Cyrus’ “We Can’t Stop” and it’s actually pretty good. I’m a certified Miley Cyrus fan, so this is legit! (Fun fact: still have my Club Miley card from about ten years ago… somewhere.)

Black and fellow singer Jon D. cover the song in an acoustic version. They have a very simple video, unlike her crazy “Friday” debacle, with just them, their voices, and no-to little autotuning. I even approve of the lyric changes that Black and Jon D. made. Being only 16, she omitted the strip club and drug use lyrics. The harmonies are really great and it’s a nice version of the song.

After the strange period of music like “Friday,” Rebecca Black left public schooling. She told Primetime Nightline that she was bullied after “Friday” hit YouTube. She’s now homeschooled, but said she still receives death threats and mean comments.

“I’ve had a lot of experience with not being liked and all that,” she said. “I think if I hadn’t had to deal with that in the past then I totally would have handled this differently and I would have gone down in burning flames. But I’ve learned that you just can’t let it get to you.”

After that I completely approve of Rebecca Black’s cover. That’s how Miley Cyrus has been carrying herself and I think that it’s a great lesson for young girls. Like my girl Miley always says, “Forget the haters, because somebody loves ya!”

What do you think of the new Rebecca Black?