Throughout his life, Rick Springfield has felt the grip of extreme depression. He tried to kill himself at a young age and his new song is titled “I Hate Myself.” One this that has helped him deal with his depression was sleeping around. He equated promiscuity to drugs, saying it helps for a period of time and brings you to a new level. 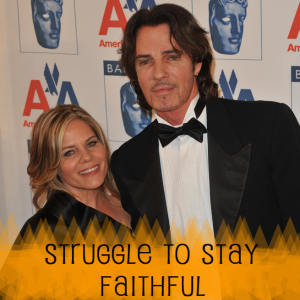 Rick Springfield told Dr Oz that he’s struggled with cheating on his wife in the past, but he has it under control. His depression fuels his best music. Jaguar PS / Shutterstock.com

Springfield was raised in a promiscuous setting and said that his promiscuity stemmed from that and always being the youngest person in the band. He admitted to cheating on his wife, Barbara, several times and believes that that also fuels his depression. His guitar was what drew the ladies in when he was younger, but at age 60 he felt lame. At age 63, Springfield feels like he has his infidelity under control.

The last time that Rick Springfield got out of control was on a trip to Las Vegas. He was on tour and it’s very hard to talk about today. He knows that his wife is an amazing woman and doesn’t deserve to be treated that way.

Rick Springfield Sober, But Getting DUIs?

Going even deeper, Rick Springfield told Dr Oz that he has struggled with alcohol problems. He said he hasn’t drank in a long time, but apparently got a DUI recently. Getting easily overwhelmed is one of the reasons that he has turned to alcohol. When he works too hard and when he works too little, her turns to alcohol.

Three years after the death of his father, Rick Springfield found that music was what could heal him. He said down at the piano and wrote a song about his sadness. He cried the entire time, but it helped.

For Springfield, meditation has been key to dealing with his depression. It helps him let everything go. He puts the darkness in his brain to work be writing music. He also hugs dogs to feel better.

Dr Oz: Rick Springfield, An Affair of the Heart

Rick Springfield’s new documentary is titled An Affair of the Heart. He greets fans, who are very happy to see him. They meet in a hotel room and jump on a bed together. He turns down the fans’ sheets and goes to leave. The women ask for him to bring them breakfast in bed the new morning. Honest fan appreciation or infidelity waiting to happen?

The one woman said she had been a fan for 30 years, since she was ten. They were both shocked to see him walk in their hotel room. The audience was treated to “Jessie’s Girl,” a song that now means more to Springfield because he’s realized how important his fans are.