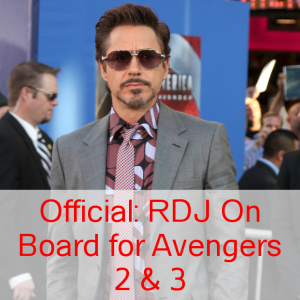 This week I just want to give everyone at Marvel a giant hug. They finally got Robert Downey Jr to sign on for Avengers 2 and 3! Downey has a two-picture agreement, according to Marvel, and production on Avengers 2, written by Joss Whedon, will begin production in March 2014 and hit theaters May 1 2015.

Downey is currently filming The Judge in Massachusetts. He was mysteriously reluctant to sign on for the films. Avengers and Iron Man 3 became two of the highest grossing films of all time, making a collective $2.7 billion worldwide. How could he turn that down?

For the first Avengers, Downey make $50 million. A nice nest egg to send your kid to college on. The other actors only banked $200,000. It’s no secret that Iron Man is the key to this whole operation. Whedon said in an interview that he had no intention of making the film if Downey didn’t play Iron Man.

While we almost lost Iron Man, we already had two new characters eager to get started. Quicksilver and Scarlet Witch were ready to go! The brother-sister act are from X-Men and it wasn’t easy getting Fox to let go of them for the film. Obviously, it’s Avengers. They got the rights just by saying “Iron Man will be there.”

Marvel was very specific that their deal with Downey is only a two movie deal. This means that Iron Man 4 is a complete wild card right now. Marvel would obviously love to make the fourth installment, but RDJ has hinted that he would like to leave the franchise eventually. He is almost 50 now, and that suit can’t be easy on the body.