Sam Trammell Cast in The Fault In Our Stars

More amazing news from The Fault in Our Stars casting! True Blood star Sam Trammell has been cast in the role of Hazel Grace’s father. This just about rounds out the cast of all-stars in charge of bringing this amazing novel to life. 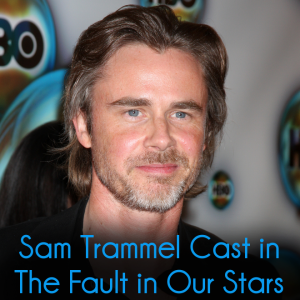 True Blood’s Sam Trammell has been cast as Hazel’s father in The Fault in Our Stars movie. Filming begins in Pittsburgh in two weeks. Helga Esteb / Shutterstock.com

In the novel by John Green, Hazel’s father doesn’t have a huge role. There is the chance that the film will give him more of a pivotal role, seeing as how Trammell is a really solid actor. Laura Dern is playing Hazel’s mom, with Shailene Woodley leading the cast as Hazel Grace Lancaster. Ansel Elgort plays Hazel’s best friend/boyfriend Augustus Water with Nat Wolff playing his best friend Gus.

Shooting of The Fault in Our Stars starts in two weeks in Pittsburgh, Pennsylvania, reports Hypable.

SPOILER ALERT: The Fault In Our Stars

If you haven’t read the book, stop reading this. Go to Amazon (here is the link) and buy the book on your Kindle, in paperback, whatever you have. Read it. That’s an order.

The Fault In Our Stars is one of the best YA novels you’ll find. Hazel meets Gus Waters at a cancer support group. They enter a very real romance and have this bond that no one else could understand. They go through the ups and downs of cancer, treatment, and remission. It’s a beautiful story that will have you in tears.

In case you didn’t read, Shailene Woodley and Ansel Elgort are prepping for their roles by visiting kids with cancer in hospitals around the country. Woodley is planning to cut off her ultra long locks on Saturday in order to get into the final stages of character development.

If you want to band with Shailene and donate your locks to Children with Hair Loss, check out this article.