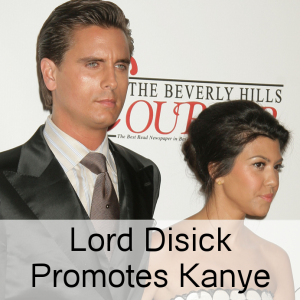 On the list of people I shouldn’t like but do, Scott Disick is at the top of the charts. He’s suave, smooth, suited up, and smart, while still being a complete a total jerk sometimes. But that’s Scott Disick.

The promo starts with Cheban chilling on a sofa, surrounded by newspaper. Disick prances around, a la Psycho, and puts on a rain coat and pulls out an axe. All the while, he dotes on Kanye’s musical stylings and how the mainstream media doesn’t understand his genius. Then, Disick reveals that “I’m A God,” Kanye’s freshest track, is about Lord Disick himself.

Thinks go down hill from there. Let’s just say, Jonathan Cheban won’t be getting a copy of Yeezus anytime soon. Dissick, still suited and jamming to Kanye’s album, sits down to smoke a cigar and stare at Chedban’s corpse.

I guess that’s a new way to promote an album?