It’s a magical weekend where geeks and closet nerds gather together to express their love and joy for old and new comics and movies. Cosplaying is like Halloween. All weekend you dress up as one or many different characters to show your pride and express yourself. Here is a run down of some of the possible costumes you could whip up to fit in at Comic-Con.

An easy choice, a zombie would just require some ripped clothes, fake blood and dirt. This costume could last all weekend, with touch ups and additions here and there. You could even say your rumpled appearance from sleeping on the floor is part of the costume. It can be as intense or safe as you want. 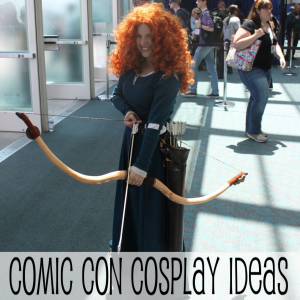 Heading to Comic-Con? Here are some of the biggest costume ideas that will help you fit in. From Princess Merida to the Mother of Dragons, cosplay is huge! (Bleeding Cool / Rich Johnston)

For the kiddos, or a kid at heart, dressing up like a minion from Despicable Me is pretty easy. Grab a yellow beanie cap, some goggles, and a pair of overalls. It’s a comfy costume that would be good for those that just want to enjoy the weekend. Not for the hardcore Comic-Con goers.

I believe this is like a cop-out. While we all love Harry Potter and have dressed up like Hermione or Harry at some point as a kid, this costume is really simple and over done. People are moving on to bigger things – like Johnny Depp’s The Madhatter from Alice in Wonderland.

Why take the black when it’s a heat wave outside? Go cool and show off some skin as Emilia Clarke’s character Daenerys Targaryen, the Mother of Dragons, Khaleesi. It’s also an excise to make your boyfriend dress up as Khal Drogo, or to snatch your own Khal at the party.

This would by my route. There are a lot of choices with a Doctor Who cosplay. Girls can go as a kick butt companion (Amy Pond is my choice) or try getting creative with Idris, the human incarnation of the TARDIS. You could even style up a dress that looks like a Dalek or a Doctor. Guys have it easy. Go as your favorite Doctor and the ladies will fall at your feet. Matt Smith and David Tennants, please line up beside my desk for inspection.

Another easy, but fun, choice for women. Or if you men want to cross dress, Comic-Con will embrace you. I’ve seen a lot of Princess Merida from Brave and The Little Mermaids this year. It’s a fun costume that you’ll feel proud to play around in.

Here’s where the lines of loyalty are drawn. While you love both worlds of superheroes, I’ve noticed the people are either Avengers or Justice League loyal. While I lean toward Avengers (IRON MAN), Superman, Supergirl, Wonder Woman, and Batman are always big at Comic-Con. Sorry, Henry Cavill, but I’ll be over here swooning for Captain America.

When all else fails, take a refrigerator box, cut holes in it and paint it yellow. Simple and effective, but not super impressive. This is the costume for someone who’s amazing costume fell through at the last minute, or who wants to hide the fact that they’ve been sleeping outside Ballroom 20 for three days.