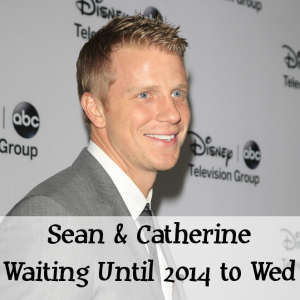 Here’s hoping everything’s going well for the latest Bachelor and his bride. Sean Lowe gave Catherine Giudici his last rose on the March finale of The Bachelor and the couple seemed ready to start their life together. Now, they are putting off tying the knot.

A source told E! News that the wedding is more likely to happen in 2014. Right after finishing The Bachelor, Sean Lowe went into Dancing With The Stars, leaving the couple with little to no time together.

Lowe previously told E! that once they set a date, ABC would be filming and broadcasting their wedding. They began planning after he left DWTS. Now they don’t feel the pressure to get married.

“Now that they’ve both freed up a little, they just want to enjoy each other this summer,” said the source. “They’ve got a few mini-vacations in the works.”

The source added, “Neither feels the need to rush. They want the wedding of their dreams – and planning it will take some time.”

Sean told Good Morning America in a recent interview that he and Catherine are holding off on intimacy until marriage.

“From my perspective, I’ve lived life kid of selfishly for a long time,” he said. “Now I’m going to try to live it the way I know to be right.”

Sean is a conservative Christian and his lady love shares the same views on waiting until marriage.