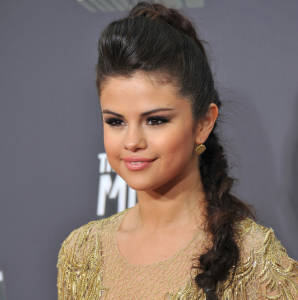 Selena Gomez might be putting her love life on the back burner, but that just means there is more time for style! The actress and singer has really come into her own in 2013 fashion wise. Evolving from her layers and mini skirts on Wizards of Waverly Place to flowing boho chic skirts, Gomez is giving us all a lesson in what’s cool this summer.

While on her way to a hair salon on June 18, Miss Gomez floated across the parking lot in a chevron groovy prairie skirt and black tank top. The look was completed with her slouchy leather boots and popped with a white handbag.

While Selena has always been about her hispanic heritage, she’s exploring a new persona for her music and upcoming tour. “Come And Get It” had a distinct Bollywood feel and she’s been performing the song wearing a bindi on her forehead and flowing Indian garments. She incorporates the dance moves made famous by big Bollywood movies as well.

Just after her break up with Bieber, Selena started going Bollywood. Maybe it was comfy, maybe it was just a phase, but she worked it.

What’s Next For Selena Gomez?

Keeping her style simple has a lot to do with Selena’s life right now. She just became a big sister and Ed Sheeran was recently seen leaving her house. While it’s not a love connection, it could be a musical one! Selena’s bestie Taylor Swift is currently touring with Sheeran and the three of them went to dinner together after the Billboard Music Awards in May. HollywoodLife believes that Gomez and Sheeran could be working on something special for her upcoming album.