Hazel Grace is going to tell you like it is. Divergent and The Fault in Our Stars’ leading lady Shailene Woodley told Entertainment Weekly just how jazzed she is to work with her cast mate and future lover, Augustus Waters. 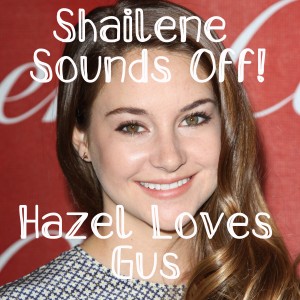 Shailene Woodley spoke out about the fans concerns on The Fault in Our Stars casting of Ansel Elgort. She thinks that the decision was perfect. (Image Credit: s_bukley / Shutterstock.com)

“Ansel is so good. I’m so excited. He blew it out of the water,” she said about their audition. “And he’s a real sweetheart. I’m so excited to have him in my life.”

She went on to say how she has been teasing him about becoming lovers in just a few months. The duo is currently filming Divergent in Chicago.

Fans of John Green’s “The Fault in Our Stars” voiced their concerns about the choice of Ansel Elgort for the role of Augustus Waters, teenage dream boat and cancer victim. The author took to his Tumblr to shut down any worried fans and to say that he completely trusts in his leading lady and gentleman.

“Ansel Elgort is also a huge fan of TFiOS (it is, in fact, his favorite book),” Green wrote. “He was a high school basketball player who also happens to be a very intellectual guy. Most importantly, when he auditioned, he became Augustus. Watching him audition with Shailene, he was just Gus and she was just Hazel. He understood Gus, and clearly had a very deep and thoughtful relationship with the book. Honestly, I’m a bit confused as to how you can dislike an actor whose work you have definitionally never seen, since his first movie isn’t out yet.”

The roles of Hazel Grace and Augustus “Gus” Waters are extremely important. Not only are they the main focus of the story, but they have this amazingly real love that is magnified by their terminal cancers. The roles need to be perfect and both actors are fans of the book.

Having read this book (and obviously sobbed my heart out for Gus and Hazel Grace) I am confident in Woodley. Like John Green said, we haven’t seen Ansel Elgort’s work yet.