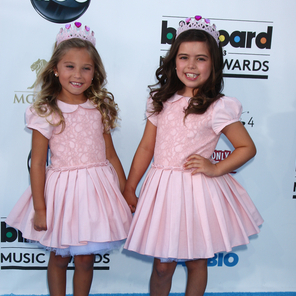 On a rainy day, nothing makes you feel good like a Sophia Grace and Rosie video from Ellen Degeneres. Usually these videos are Sophia Grace standing on Ellen’s stage with little Miss Rosie dancing in the back.

Now, Sophia Grace has the most adorable of music videos. Sophia’s “Girl’s Just Gotta Have Fun” is the most pinked, blinged, and tutued music video ever. She rocks some Audrey Hepburn shades and rides in a pink mini-Cadillac.

“Nicki is my princess and Ellen is my queen. Put it all together that’s a Hollywood dream.”

My favorite part is not just the excellent music and princess references, but when Sophia Grace pies a little boy in the face. It’s a fun little song that’s age appropriate and shows off all of Sophia Grace’s best vocal abilities. From her rapping to her range, this little girl is one of the most talented entertainers out there.

“Girls Just Gotta Have Fun” was directed by Matt Alonzo and produced by Michael Busalacchi and Kelvin Craver. The song is available on iTunes and Amazon as a single.