In a candid interview with The Vulture, Game of Thrones’ Sophie Turner talked about Sansa Stark’s not-so fairy tale wedding day. Fans of the series have always been split on Sansa Stark, but I think we can all agree that this was one of the best weddings ever on television.

If you haven’t seen last week’s Game of Thrones, I encourage you to watch before you read. It was an amazing episode, as always.

First of all, Sansa gets to marry Tyrion Lannister, which is probably the dream of a lot of GOT fans. Peter Dinklage played the part of Drunk Tyrion this week to a T. 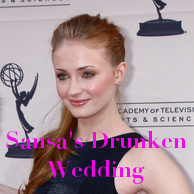 Sophie Turner (Sansa Stark) said that her wedding to Tyrin Lannister was awkward and hilarious. Go inside the food, wine and guests of the big day. (Helga Esteb / Shutterstock.com)

“He’s good at playing drunk, isn’t he?” said Sophe Turner. “He was doing all this stuff to distract us and make us laugh, like falling over, when we were filming. It was so hard to concentrate.”

She said that Conleth Hill, who plays Varys, was also cracking the cast up during the tense scene. To add to the mayhem behind the scenes, Turner said that their food for the wedding feast was left out for two days. She had to sit with a plate of rank food in front of her to finish the scene.

“And then there’s the wine, which is grape juice,” Sophie said. “Everyone hates it. Peter has to drink it all the time. It’s nice for one or two scenes, but Peter is constantly downing that stuff because Tyrion does. So he’s always like, ‘Can we get a break from the grape juice? Please?'”

Turner and Dinklage are friends off set but they didn’t prepare for any of the wedding, feast or wedding night scenes beforehand. Turner said that it just made everything more awkward, which was perfect. She said she had been looking forward to Sansa’s wedding for a long time.

So what about Sansa’s former beau, King Joffrey? On Sansa’s wedding day, Joff was his normal, jerk self and made horrible comments to the tearful bride. Sophie said that she and Jack Gleeson spent hours filming the wedding march. While we all hate Joffrey, the cast can’t say enough good things about Gleeson.

“It’s because he’s the most polite, lovely, intelligent person in the whole cast! He’s just so humble and everyone loves him,” Sophia said. “There’s nothing anyone can say bad about Jack. He literally just turns it on. As soon as they go, ‘Action!’ he goes from lovely Jack to the most sadistic, horrible creep on television. Between takes, we have lovely conversations.”

Sophie Turner may be 17 and fake married to Peter Dinklage, but she doesn’t think that Sansa’s plight is as promising. She’ll still be sadly looking at ships and wishing she could be Loras Tyrell’s beard for a while.