In times of distress, it is wonderful to see so many people with more than their fair share, giving back to those in need. Immediately after the tornado caused such devastating loss to the people of Oklahoma, stars were reaching out to help in any way they could. 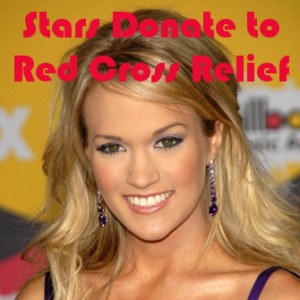 Carrie Underwood has made a substantial donation to the American Red Cross, as reported by E! Online. Underwood graciously donated $1 million to aid in the relief efforts for victims.

Underwood explains why the cause was so important to her, in a statement reported by E! Online, “I have watched the devastation in my home state of Oklahoma over the past several days with great sadness, with the help of my fans who attended my concerts over the past year, we can offer the Red Cross a little extra help in comforting those affected by the recent tornadoes.”

Kevin Durant is another mega-celeb reaching out to help with the relief effort. In a report by International Business Times, Durant also pledged to donate $1 million.

He told the Associated Press, “I call Oklahoma City my home. I go through Moore all the time. It’s unfortunate. We’re going to come together as a city like we always do and we’re going to bounce back.”

The donation was made to the American Red Cross, ideally to encourage others to follow suit, and contribute what they can to the relief. Durant also took to Twitter, urging his followers to donate anything they can spare to help the victims who lost everything.

Spade told E! Online,”When I was four, I moved from Michigan to Arizona and our house got hit by a tornado a week later. Always been scared of them. I know the Red Cross will do everything they can to help people get the help they need.”

Each person has their own reason for donating, and lending a helping hand. It is amazing to see these celebrities use their fame in such a positive manner, and working to help as many victims as possible. The people of Oklahoma will rebuild in time. With continued help from such generous people, that time will come quickly.