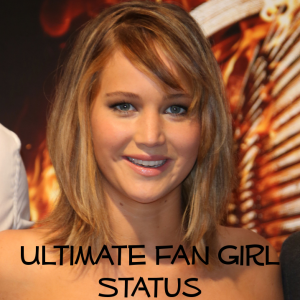 Check out this video of Jennifer Lawrence geeking out at San Diego Comic-Con 2013 over Jeff Bridges. Just when you think she can’t get any better, she does. Featureflash / Shutterstock.com

It happens to the best of us, Jennifer Lawrence. I can imagine that I would lose my cool if J.Law herself walked up to on the red carpet, but

Before freaking out, J.Law talked about her excitement about The Hunger Games: Catching Fire. She said coming back to set after her Academy Award win was really no different. She joked about changing things up, be we all know that Jennifer Lawrence is a down to earth, chic chick. She wouldn’t let the fame go to her head. Now, meeting Jack Nicholson… maybe.

Co-star Josh Hutcherson said that the award couldn’t have gone to a better person. He said he loves “taking it easy” with the cast on set. Lenny Kravitz (Cinna) also said that he adores Jennifer Lawrence.

In the video, she runs up to Jeff Bridges and breathlessly tells him that she’s a huge fan. She has to drag her assistant away with her and she tries to hide her starstuckness.

An E! reporter then told Jennifer she could take his microphone and interview Jeff Bridges while Ben Barnes smiled and watched this all happen. Lawrence asked Bridges what his favorite character and movie was.

“Does it rhyme with The Schmude?” she asked, alluding to his character in The Big Lebowski.

Lawrence then stood in awe as Bridges praised a film by director Scott Cooper, Out of the Furnace. You could see her mentally reserving it at the RedBox.

Watch the video and let us know: what’s your favorite J.Law moment? Meeting Jeff Bridges? Meeting Jack Nicholson? Or falling at the Oscars? I feel like these moments are a Neapolitan ice cream of greatness.