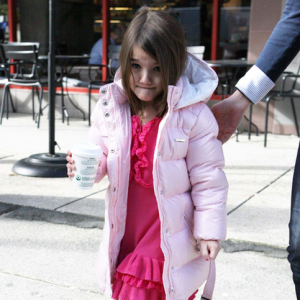 Suri Cruise held her own against an angry autograph seeker over the weekend. He called her “a little brat kid” and a paparazzi came to her defense. (Tumblr)

Oh no you didn’t. A paparazzi clearly was not thrilled with my girl Suri Cruise and decided to take it out on her. Yes, taking your frustrations about not getting a scribble across a photo on a seven year old is totally fine. Not.

In a video from Fishwrapper, Suri, her mom Katie Holmes, and a friend were on their way out of a hotel in New York City. THey were greeted by a throng of reporters and paparazzi. Cesar Pena of 247 paps.tv said that a “guy who waits for celebrities [to get] their autographs to sell them on eBay” was trying to get the seven-year-old and her mom to sign his posters.

Suri Cruise Fires Back at Paparazzi

Suri is not afraid to take on the paparazzi. She’s ruined their photos and told them off before. She exploded at the paparazzi, tells them to get out of the way, stop taking photos, she wanted to get in the car. All the way, paparazzi were telling Suri how much they adored her. When she was safely in the car, but Katie was still out, the autograph hunter yelled at them.

“Bye, Suri, you little brat,” he said. Pena told the man to step off, being a father himself and not liking the way the guy was acting.

Pena later told Us Weekly that he had to step back before taking things too far.

“We try our best to protect Suri,” he said. “Of course we take pictures of her, but we always keep out distance… I always try to protect any of the celebrities I work on.”

He continued. “I have a little girl, so [the name-calling] triggered quick for me. I saw he as my own. She’s only seven years old… I went into Daddy mode.”

The popular blog Suri’s Burn Book took on the topic, pretending to be little Miss Cruise, “Made a few phone calls from the car, and guess what? It only cost $35 to have this guy’s knee caps busted. I can defend myself, thank you very much.”