I had high expectations for Emma Watson’s lastest flick, The Bling Ring. Being a Watson fan since she first frizzed her hair out for Harry Potter, I knew my girl wouldn’t let me down. What I didn’t expect was a group of young actors that really held their own against the great Emma Watson. 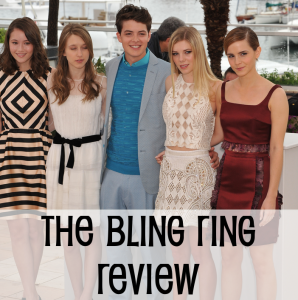 Isreal Broussard is the standout performer of the bunch. He gives the perfect image of a person trying to fit in and also finding themselves. I really enjoyed Katie Chang and Taissa Farmiga’s performances.

Sophia Coppola’s The Bling Ring is the tale of a group of Hollywood teens running amok in Calabasas. New kid Marc (Israel Broussard) moves to the area after a series of failed schools. He hopes this time it will stick and he’ll fit in. That’s when he meets the leader of the whole operation, Rebecca (Katie Chang).

Now, Rebecca is a very interesting character. Her mind is completely consumed with thoughts of Lindsay Lohan and Paris Hilton. She teaches Mark just how to covertly rob people and then ups the ante by sneaking into people’s homes.

Marc feels that he’s finally fitting in and Rebecca is his savior. She introduces him to her friends, Nicki (Watson), Sam (Taissa Farmiga), and Chloe (Claire Julien).

Nicki’s mom is obsessed with The Secret and homeschools her two daughters and Sam, who the family took in after her mom split town. Leslie Mann gives a hilarious performance as the dippy and delusional mom that lets Nicki and Sam run all over Hollywood. She rarely questions when they start wearing new clothes and is flabbergasted when the police come to arrest her daughter.

Who Was Robbed By The Bling Ring?

The story takes a horrible turn when people start reporting the break ins. Orlando Bloom, Rachel Bilson, Audrina Patridge, Lindsay Lohan, and Paris Hilton were among the many so-called victims. While stealing isn’t right, these people left their homes unlocked and are beyond stinkin’ rich.

The ending to The Bling Ring is funny and great. The entire time I was watching I started caring about the characters and hoping they wouldn’t get caught. Every police siren in the background set me on edge for Marc, who is really the star of the show.

Of course, as soon as I strutted out of the theater in my best Nicki Moore impression I was repeating MIA’s “Bad Girls.”

The soundtrack for The Bling Ring is really excellent. It captures the essence not of the film itself, but the characters. You can see Emma Watson strutting to “Bad Girls” and Chloe jamming in her car to Kanye West and Chris Brown’s songs on the album.

Overall, well done as always, Sophia Coppola. This is a must see movie.