In Memorium: Best Shows of the Season Cancelled

Say it isn’t so. The funniest shows of the last season, and possibly the last few years, have been cancelled. Here’s the run down of what ABC, NBC, CBS, Fox and The CW have pulled the plug on. Yes, some we are happy about, but some of these shows were cut short in their prime.

ABC Renews The Neighbors, Cancels How to Live with Your Parents

These really are no surprise. Once Upon a Time had an earth shattering season finale and is reminding us all why we love (and miss) LOST. The Neighbors had an epic comeback last season and critics went from hopeful obituaries of the show to praising it’s unexpected and smart humor.

Canceled: Happy Endings, Body of Proof, Malibu Country, Private Practice (final season), Red Widow,The Family Tools, How to Live With Your Parents (For the Rest of Your Life), Don’t Trust the B— in Apartment 23, Zero Hour, Last Resort and 666 Park Avenue

Let’s take a moment to morn Don’t Trust the B. While all of the stars have gone on to other projects, this little show was so funny. We’re really going to miss James Van Der Beek’s antics. We’re not shocked at all about Happy Endings, How to Live With Your Parents or Family Tools. R.I.P. bad television.

CBS Renews Two and a Half Men, Cancels Rules of Engagement

Canceled: CSI: NY, Vegas, Golden Boy, Rules of Engagement, Made in Jersey, Partners and The Job 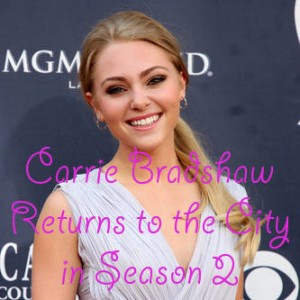 NBC, Fox, CBS, ABC and The CW have announced their renewals and cancellations. The Carrie Diaries is getting a season2 and NBC cancelled it’s comedy block. (Image Credit: Helga Esteb / Shutterstock.com)

Zero surprises here. The Big Bang Theory, How I Met Your Mother and 2 Broke Girls are all coming back next season. We can rejoice that Rules of Engagement is being put out of it’s misery. It’s more infuriating that waiting to find out who Ted Moseby’s soul mate is.

The CW Renews The Carrie Diaries & The Vampire Diaries

Renewed: Arrow, Beauty and the Beast, The Vampire Diaries, Supernatural, The Carrie Diaries, Nikita (a shortened final season) and America’s Next Top Model

Time for a happy dance. For once, network executives listened to fans and renewed The Carrie Diaries. Very few things are as perfect as Anna Sophia Robb as a young Carrie Bradshaw. The show is sparkly, 80’s centric, excellently written and perfect for The CW. Not to mention Doctor Who’s Freema Agyemen as Larrisa, the predecessor to Samantha Jones.

In an example of network executives not listening, Glee was renewed for two more miserable seasons. At least they kept on two of the best shows on television, New Girl and The Mindy Project.

NBC Cancels Go On, The New Normal, & Ready For Love

Here is where I want to revolt. Not only do we have to say goodbye to 30 Rock and The Office, their time slot replacements are getting the boot. The incredibly heartwarming and adorable The New Normal, starring Justin Bartha, was canned. Also, Matthew Perry’s comeback Go On was cut short in it’s prime.

The only show that NBC kept around was Parks and Recreation. Who cares about Community? It’s another show that needs to be put out of it’s misery. how it’s still around and The New Normal was cancelled is beyond me.