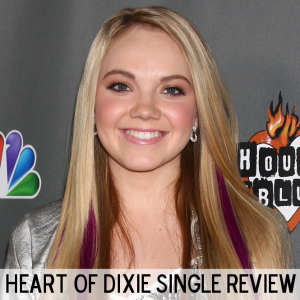 When Danielle Bradbery sang her first note for The Voice earlier this year, all of the judges were fighting over her. Adam Levine was salivating to have her on his team and Usher pulled the Justin Bieber card, but she was won over by Blake Shelton. She became the darling of the competition, touching the hearts of parents with her wholesome and sweet appearance and teens with her Taylor Swift qualities.

Bradbery went on to dominate the competition and beat Michelle Chamuel in the finals. The winner of The Voice gets a recording contract and the chance to make their debut album. Fans couldn’t wait for the release of Bradbery’s music, especially after her performance with Hunter Hayes on the finale episode.

Danielle Bradbery released “Heart of Dixie” this week and it’s already at the top of the iTunes single chart. The song is not what you might have expected from a 16-year-old country singer, but it’s definitely amazing.

“Heart of Dixie” takes a similar turn as “Goodbye Earl,” by the Dixie Chicks. Dixie is a young wife that has a deadbeat husband and a going nowhere job. When her husband doesn’t come home one day, Dixie takes her life and leaves. The song is about a woman that came from nothing with big dreams and decides to take control of her life.

Danielle Bradbery’s career will have the lasting quality of LeAnn Rimes. This song is just the beginning for her shining career. Bradbery’s debut album doesn’t have a release date, but putting this on repeat should hold you off for a while.