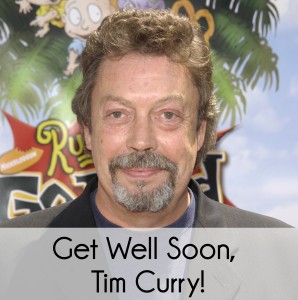 Legendary actor Tim Curry is recovering in his Hollywood Hills home after suffering a major stroke. His speech was not affected from the stroke. Featureflash / Shutterstock.com

We’re sending positive energy and well wishes to Tim Curry this week. The Rocky Horror Picture Show actor suffered what is being described as a “major stroke.”

Curry’s rep told E! News that he suffered a stroke “last July,” but Huffington Post and UK’s Daily Mail are saying he collapsed on May 23 in his Los Angeles home.

“He has been going to physical therapy and in great humor,” his rep said. “He thanks everyone for sending good wishes.” She went of to say that he is doing well and the stroke did not affect his speech. Phew!

Whenever it happened, Curry is receiving an out pouring of love from fans. Bust Magazine wrote how they aren’t ready to say goodbye to Dr Frank N Furter. Personally, I can’t imagine a world without Nigel Thornberry.

Curry’s other credits include The Hunt for Red October, Oscar, The Three Musketeers, Muppet Treasure Island, and Pennywise the clown in Stephen King’s It. Tim Curry was supposed to appear in Trevor Nunn’s UK production of Rosencrantz and Gildenstern Are Dead, but pulled out after a chest infection resulted in asthma attacks.

Curry is unmarried and lives alone in the Hollywood Hills. He likes to keep his personal life private, but we wish him well on his journey to recovery! Also, if he could work his magic and get a Wild Thornberrys reunion going that would be fabulous.