Praise be to the acca-Gods! Pitch Perfect took the world by storm and Anna Kendrick’s “Cups” is still in the top 10 on the charts, but now we have a new reason to sing. The cast of Pitch Perfect is recording an a cappella holiday album. 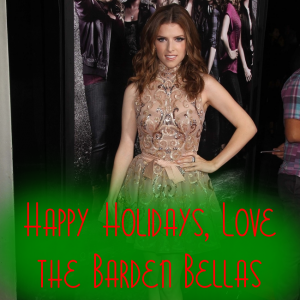 Hana Mae Lee played the quiet and creepy Lilly in the 2012 film. She revealed on the Teen Choice Awards red carpet that the group does in fact have a new album in the works.

“We have a holiday album coming out so stay tuned,” she told MTV. “I’m going to be singing a very special song.”

The album will be full of classic holiday songs and Lee will be singing “Silent Night.” No joke.

After Hana Mae Lee spilled the beans, Universal confirmed the project. They didn’t have additional details, but it’s safe to say the album will be out in time for the 2013 holiday season. How Anna Kendrick will turn “Santa Baby” into as big a hit as “Cups” we’ll have to wait to see.

This news should hold fans for a little while. We have to wait until 2015 to get more craziness from Fat Amy and the Trouble Tones. Until then, “Cups” will continue to be my ringtone and I’ll dream of being an Barden Bella.

What songs do you want to hear the Barden Bellas and Trouble Tones tackle on the Holiday Album?