Hollywood can’t get enough of the sci-fi and monster movie craze. Sparked by Twilight and Walking Dead, producers have realized they can make a quick buck off of someone by throwing a zombie, werewolf or vampire in a film. I drew the line for this kind of movie with Abraham Lincoln: Vampire Hunter, but Warm Bodies, out now on DVD, really is worth the watch. 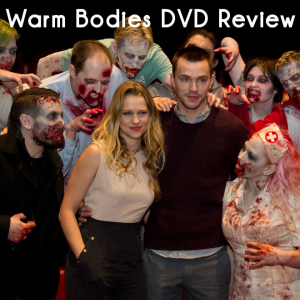 Zombies Want to Be Human in Warm Bodies

Nicholas Hoult (X-Men: First Class) stars are brain hungry zombie, R. He is comfortable just wandering around a deserted airport and living in an old commercial aircraft. He even has meaningful grunts with his best friend, M. Actually, none of them remember their names until Julie and her band of young human friends cross the line into zombie territory.

Like the creatures in Zombieland, the zombies in Warm Bodies are infected. They will rise from the dead if they spare the brains of the victim, but brains are the best part, explains R. He and his band of zombies attack Julie and her friends. While he’s munching away on her boyfriend (played by Dave Franco), he takes a mouthful of brains and gains all of his memories.

From there, things start to change. R takes Julie (Amber Heard) for his captive and falls in love. The love starts his heart again and he stops decaying. As his wounds heal and his speech comes back, Julie starts to see that they could help the rest of the zombies. She and R travel back to the human compound, which is lead by her zombie hungry father (John Malkovich).

Before seeing Warm Bodies, I was told this film was a retelling of Romeo and Juliet. While I see those parallels, including a balcony scene, I think this is much more like Beauty and the Beast. R takes Julie captive, she hates him then learns to see the good in him, she wants to help his friends become human again… without giving away the ending, the similarities are everywhere.

What I thought was going to be a Redbox $1 movie, turned out to be a major buy! This is a movie that guys and girls can enjoy.