The world’s funniest doctor, Ken Jeong from Dr. Ken, was actually a doctor in real life, before playing the part of a Chinese mobster in The Hangover. There is no denying that Ken is absolutely hilarious and he even got his good friend, Dr. Oz, dancing as they made their way to their seats.

Will Ken Jeong’s Daughter Zooey Be On Dr. Ken Again?

Dr. Oz asked Ken about one of his daughters, Zooey, who has appeared in a couple of episodes of Dr. Ken. Zooey plays Ken’s TV son’s stalker, which is an idea Ken came up with thanks to the deadpan stare she can pull off. Ken joked that Zooey actually loves being in school though, so she does not want the actor lifestyle right now.  When Ken asked Zooey if she would like to be on another episode of Dr. Ken, she replied, “do I have to???”

On the other hand, Ken’s other daughter Alexa prefers to stay off camera and is interested in being an illustrator or producer. But for now, she is more interested in gymnastics and was even second in a Southern California state gymnastics competition. Dr. Oz joked that with both parents being doctors, one daughter is a gymnast and Ken added that the other is a burned out actress. 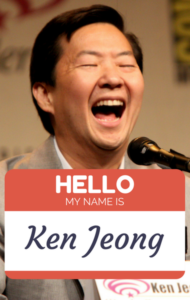 Actor and physician Ken Jeong sat down with Dr Oz to talk about fame, his family, and his show. (gageskidmore / Flickr)

Dr. Ken VS The Hangover

Ken admitted to Dr. Oz that the latest season of Dr. Ken was a bit more personal but much more creatively gratifying. He shared that he has had more confidence as a writer to explore more family and emotional issues.

Ken shared that his real-life wife is a breast cancer survivor, and she is still cancer-free. So, he wanted to write a story-line where his TV wife has a cancer scare. A lot of real-life events inspire story-lines in his show. Let’s take a look at how previously being a doctor has impacted Ken’s life as an actor…

How Do You Go From Being a Doctor to Being an Actor?

Ken got the chance to meet some of Dr. Oz’s medical interns backstage and explained that recently, he, his wife, and a friend (who is a medical consultant on the show), got to explore more unique, “med-school kind-of cases” like Hypercalcimia mimicking depression.

Dr. Oz was curious about the interaction between comedy and medicine because Ken was a great physician before he became an actor. Ken feels like his TV show is a 24/7 job and joked about being on “creative call.” Another parallel between media and medicine is the stamina required to work all of the hours needed. Dr. Oz agreed and said that another similarity is that in both careers, he has practiced both honesty and intensity.

Ken is originally from Korea and recently went back to visit his parents. He shared that Dr. Ken was just sold in Korea and he had the best time while he was there. Dr. Oz was curious whether Ken was famous in Korea and Ken shared that when he was promoting Hangover 2, the head of the studio in Korea came to him and said

Don’t take offense, no one knows you here… No one likes you.

Do you love Ken Jeong? Do you wish that his daughter, Zooey, would appear on another episode of Dr. Ken? Leave a comment below to let us know!