Don’t worry, Spidey fans, nothing is for sure yet. New stills of Emma Stone on the set of Amazing Spider-Man 2 have started wild rumors about the fate of her character, Gwen Stacy. Here’s what we know: 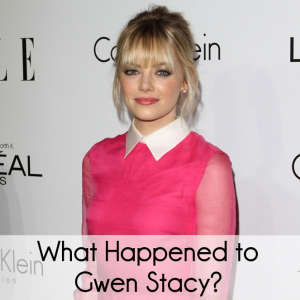 Gwen Stacy tragically perished in the comic series during a fight between Spider-Man and the Green Goblin. Peter Parker tried to save her and she suffered major whiplash. “The Night Gwen Stacy Died” is infamous among fans.

Stone has been spotted wearing this outfit several times during filming. While fans believe that we may see the untimely demise of Spider-Man’s true love, there is no way of knowing. We do know that Mary Jane Watson makes her appearance in this episode of the saga, played by Secret Life of the American Teenager‘s Shailene Woodley.

IMDB has no sign of the Green Goblin appearing, just Norman Osborn. Jamie Foxx is playing Electro and Paul Giamatti plays The Rhino. Stan Lee is listed as playing a graduation guest. Emma Stone was on hand at graduation, along with Andrew Garfield.