Did Nicki Minaj Get Burned by American Idol? 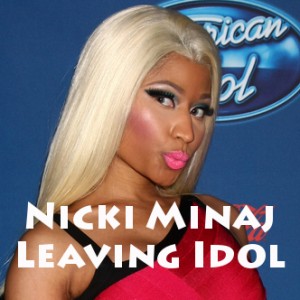 A source close to Nicki Minaj has confirmed that the singer is leaving American Idol after this season. She is focusing on music and her personal projects. (Image Credit: Helga Esteb / Shutterstock.com)

The rumors about American Idol are more interesting that the show itself. The beginning of this season was all about Nicki Minaj and Mariah Carey’s epic feud. The two divas just couldn’t fit their egos at the same table. Now that the competition is coming to a close, more people can list off the details of the judges drama than who is actually in the final two.

Nicki Minaj has confirmed to Us Weekly that she will not be returning to American Idol for another season of judging.

“She’s okay with it. She had a great time but was only going to do one season anyway,” a source told Us.

It sounds like she’s covering up her firing. The source said that Minaj wants to focus on her new album, tour and just overall personal life.

Who is Returning to American Idol?

So now that Minaj is out, let’s tally up who’s left on the judges panel. Randy Jackson has confirmed that he is indeed leaving the reality singing competition.

“I am very proud of how we forever changed television and the music industry,” Jackson told Us. “It’s been a life changing opportunity, but I am looking forward to focusing on my company Dream Merchant 21 and other business ventures.”

Taking Randy’s seat on the panel is current judge Keith Urban. He told Ellen Degeneres this week that he is excited to return. Keith is an excellent addition to the show because he gives constructive critiques and doesn’t stir up a ton of drama.

As for Mariah Carey, the powerhouse singer is keeping quiet just now on her judges seat. She is planning a world tour and has a number one single with Miquel, “#Beautiful.”