In the boy band world, you have to keep up with the competition. The Backstreet Boys have announced that they are going on tour this summer and releasing a new album. Backstreet’s back, all right. They bring with them Jesse McCartney and DJ Pauly D.

Nick Carter made the announcement to Ryan Seacrest. The boys, who are now men, are also working on a documentary and celebrating the 20th anniversary of their band. That’s 20 years of making girls, who are now women, scream and dance around their rooms. 20 years of battling over Nick Carter or Justin Timberlake, even though there isn’t much of a contest nowadays. And 20 years of causing a rift between best friends, forced to choose ‘N Sync or BSB. 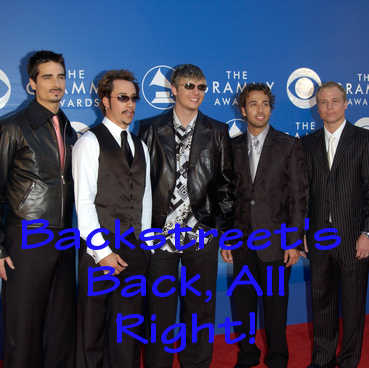 The Backstreet Boys have announced a new album at 20th Anniversary tour this summer. “In A World Like This” kicks off August 2 2013 in Chicago, Illinois. (Image Credit: Featureflash / Shutterstock.com)

In just one summer we get the comeback of almost every influential boy band. First, New Kids on the Block, Boyz 2 Men and 98 Degrees announced their huge summer comeback tour on The View. This announcement not only brought their fan bases out of hibernation, but gave new fans goose bumps with excitement.

Then, after a long hiatus, the Jonas Brothers announced a new U.S. tour. Fans of the JoBros had been waiting patiently and their new single, “Pom Poms,” brings the band into the year 2013. When the boys started out, Kevin, Nick and Joe were all tweens wanted to talk about. While tween girls now are obsessed with One Direction and The Wanted, these bands could never reach the caliber of the Jonas Brothers.

Backstreet Boys: “In A World Like This” Tour & Jesse McCartney New Album?

Backstreet‘s new tour is title “In A World Like This.” Tickets go on sale May 17 and the new album date has yet to be released. No doubt this also means that Jesse McCartney will be releasing a new album, or at least a greatest hits album. McCartney is currently starring on Army Wives. All five original Backstreet Boys will be returning for the tour that begins August 2 2013 in Chicago, Illinois.