Xbox One Reveals Trailer for Call of Duty: GHOSTS

Microsoft revealed the new Xbox One entertainment console recently. What could be more fitting than a new game to go along with it, and why not make the game a next-in-series of the most successful game in history! Call of Duty… 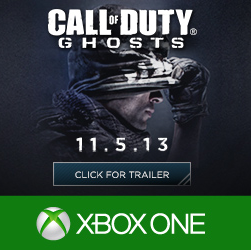 Call of Duty and Xbox One revealed the trailer for Call of Duty: GHOSTS, expected to be released in November 2013. Will it be a positive move for the game?

The top selling series of gaming is Call of Duty (C.O.D.) and it all began in 2003 (PC only- a AAA rated title) with the release of Call of Duty. The Xbox version was released in 2009 and from then it exploded into the phenomenon it is today.

C.O.D. 3 was a bust. Not many fans or critics liked it due to repetitive graphics and no improvements. The fail of this game was nearly the end of the series. Infinity Ward came back in as developers of the series and C.O.D. 4 – the highest rated game in history; winning countless awards and recognition for Treyarch (series producers). Next in line was World at War. With faster game play, customizables, leveling, and the introduction of the “Zombies” attack series, this was a new era in gaming history.

C.O.D. Black Ops was released in 2010 and was very well received. It was different than the rest of the C.O.D. series because it introduced the most innovations ever seen in a first-person shooter game. It sold 5.6 Million copies in the first 24 hours!

Modern Warfare 2 was the next in the series and made the record books for fastest selling game and highest sales. Modern Warfare 3 followed in 2011 and again was a record breaker with new innovations and all around smoother game play. It outsold Black Ops by selling 6.1 Million copies in the first 24 hours!

The last release was Black Ops II and it has the most modern maps of the series. Released in 2012 it continued the rave reviews with more improvements and awesome graphics. How is Treyarch going to top it? We will need to wait and see what the not yet released  Call of Duty: GHOSTS will have in store for us. From the looks of the “teaser” (link above) it will have the modern maps however there is a lot of intense detail and many improvements to character movement that we are anxious to see. Expected release date is 11/2013.