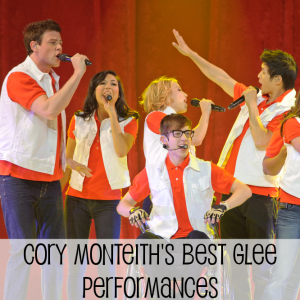 This could be considered masochistic, watching the best of Cory Monteith’s Glee performances in the days following his death. I, and my fellow Gleeks, want to remember him in the good times. The times when he and Lea Michele were a “will they won’t they.” That time that his character lost his virginity to Santana. And most of all, the time when he sang in the shower.

This was the first song we got to hear from Monteith. While it was very autotuned, there is still the sure to become iconic shower scene with Monteith dancing.

Beware. This is one that will move almost any 90s girl to tears. Especially a Backstreet Boys fan.

We’ve all seen and heard Glee’s “Don’t Stop Believin'” but this is a truly touching video. It gives you a feeling of the cast and their friendship when shooting the pilot, but also Cory and Lea Michele’s relationship.

When the Finchel romance was just bubbling and brewing, Finn decided to send musical messages to Rachel Berry. This is one of my favorites.

Talk about power ballad. While it was a little strange when it first aired, I think this is one of my favorites. Also, we don’t have the autotuned Cory Monteith that we got a lot during season one.

When this single was released on iTunes, I think I listened to it over 50 times. Not only was the video hysterical, but Cory’s voice actually sounds great. Here, the last song on the list is “Dammit Janet” from Rocky Horror Picture Show.