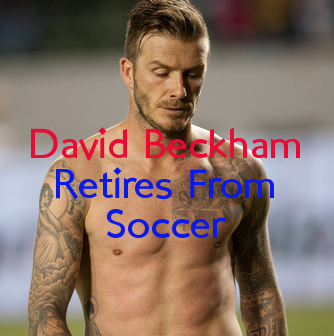 David Beckham announced that his time on the soccer field is over. He plans to work with UNICEF and to help grow the sport in China. (Image Credit: Photo Works / Shutterstock.com)

One of the world’s most notable soccer players, and my favorite abs, David Beckham is moving on from soccer. At 38, Beckham has decided that it’s the “right time” to retire. David released this statement in UK’s Daily Mail:

“If you had told me as a young boy I would have played for and won trophies with my boyhood club Manchester United, proudly captained and played for my country over 100 times and lined up for some of the biggest clubs in the world, I would have told you it was a fantasy. I’m fortunate to have realized those dreams.

Nothing will ever completely replace playing the game I love. However, I feel like I’m starting a new adventure and I’m genuinely excited about what lies ahead. I’m fortunate to have been given many opportunities throughout my career and now I feel it’s my time to give back.”

Beckham has played soccer for two decades and floated to six teams. He was captain of the English team for six years and played in three World Cups. He made a name for himself with Manchester United, where he played 394 games and scored 85 goals.

Now that he has more time on his hands, David Beckham will be promoting and working with Adidas, UNICEF, Sky Sports, and growing soccer as a sport in China. Not to mention all of his underwear advertisements and successful cologne line.

I think the Beckhams will be just fine.