When Joan Rivers looks in the mirror she sees another person. She thinks that she would be out of work, or working as Betty White’s maid, if she hadn’t had plastic surgery. From Joan’s husband’s suicide, to becoming bulimic, to healing life with laughter, Joan Rivers has seen it all and made fun of everyone.

Joan’s daughter Melissa joined her candid interview with Dr Oz. It’s great that Dr Oz was able to have an open and non-judgemental conversation with them. Melissa however, didn’t hold back about her mom’s bad habits. She told Dr Oz that she is worried about her mother’s health and her addiction to plastic surgery. Now that Joan is 79, is there any point to her getting more plastic surgery? 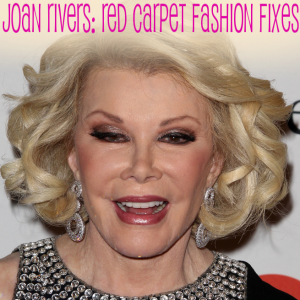 Melissa is Joan’s boss for a few hours a week on E!’s Fashion Police. Joan may not listen to her, but it’s still satisfying. Melissa feels like a squatter in her own home because of her Joan. Joan took up house with Melissa and they have their own reality series on WE. Even Melissa’s dogs seem to like Joan better.

Dr Oz wanted Joan and Melissa to come clean on their bad habits. Melissa said her mom has a horrible habit of eating junk food in the morning. Joan likes to put Cool Whip on muffins and eats M&Ms first thing in the morning. Melissa thinks it’s disgusting. Rivers also eats ketchup on everything.

Joan hates that Melissa smokes and doesn’t wear enough makeup. Melissa is a California girl that could go the day in just mascara, while Joan likes a full coverage look at all times. Melissa said she has cut back smoking to about five to seven cigarettes a day. Still, that’s a lot.

Dr Oz pulled out one of his famous demonstrations and had a set of real lungs to show Melissa. The first lung was beige, light and healthy. The second was black, tar spotted, and just plain disgusting. Dr Oz said she was looking into her future if she didn’t stop smoking.

The Rivers family has seen it all. Good, bad, ugly, and smelly on the red carpet. Joan said that the worst thing she’s encountered is a starlet with rank breath. Dr Oz said the quickest fix is fennel seeds. You will get these a lot of times when you exit an Indian restaurant and they even aid with digestion. Smell ya later, Goldie Hawn.

Melissa said that the high heels and bunions on the red carpet are a huge issue. Women wear high, strappy sandals and the effect is just hideous. Dr Oz said that toe separators, which you can get at a drug store, will fix a lot of these issues. They may the shoes comfier, but the look with a strappy heel isn’t cute. These toe separators would work best with a close-toed pump.

The issue that gets both Joan and Melissa burning up is the camel toe. It’s not flattering and it can have bad effects on your health over time. Dr Oz said that the “reverse wedgie” cut off air and heats up the nether regions. This can cause yeast infections. There is a thing called a Camel Toe Guard that velcros to the front of your pants and keeps the camel toe at bay. Joan will be sending a three pack to Mariah Carey tomorrow.