After announcing her return to Brown University this fall, Emma Watson has signed on to another project. This girl has more ambition that Hermione Jean Granger ever had. She’s going to need a Timeturner just to keep up with class, filming, and life. 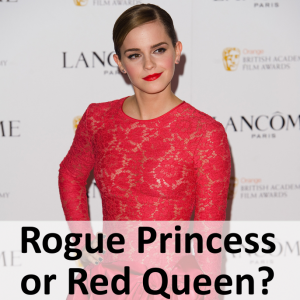 Emma is teaming up with Harry Potter producer David Heyman to adapt the upcoming trilogy “Queen of Tearling.” The books haven’t even dropped yet and are being toted as “a female Game of Thrones.” The first book is due in 2014 by Erika Johansen.

HarperCollins has the right to the books and Warner Bros. will be at the helm for the films. “Queen of Tearling” was inspired by a speech that the author heard Barack Obama make in 2007. Johansen told Variety that the story is set 300 years after “an environmental catastrophe when a malevolent Red Queen holds considerable power.”

The series follows 19-year-old princess Kelsea Glynn, who is on mission to reclaim her mother’s throne and save the kingdom of the Tearling from the dark magic of The Red Queen. It’s obvious that Emma would make an excellent rogue princess, but she could also do wonders with The Red Queen.