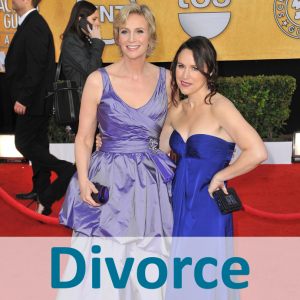 Jane Lynch has decided to end her marriage to Dr Lara Embry after just three years of legally wedded bliss. The couple married in Massachusetts, where gay marriage is legal.

“Lara and I have decided to end our marriage,” Lynch told People.com “This has been a difficult decision for both of us as we care very deeply about one another. We ask for privacy as we deal with this family matter.”

Jane Lynch Did Not Have a Prenup, Sources Say

The Glee star and Embry are residents of California and because the marriage was made in a state where it is legal, the state recognizes it as a marriage. The courts will most likely dissolve the marriage.

The tricky part is that California rules community property, and unless there is a prenup Lynch and Embry will be splitting everything 50/50. This includes the huge amount of bank that Sue Sylvester has brought in over the years. Sources confirmed to TMZ that the couple does not have a prenup.

Lynch and Embry met in 2009 at a fundraiser in San Francisco and married in 2010. People.com also said that Jane Lynch is busy starring in Annie as Miss Hannigan on Broadway. She did perform at the Tony Awards on Sunday night.

We wish Jane and her partner the best of luck as the go forward.