The twitter feud is continuing to intensify between Kendall Jenner and Frances Bean Cobain.

The feud was sparked when Jenner tweeted, “Just wish things could be easier sometimes mann.” 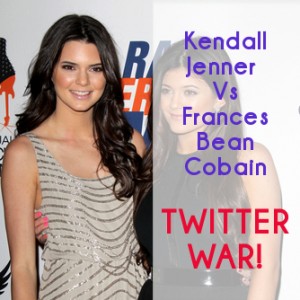 Frances Bean Cobain and Kendall Jenner are locked in a slow moving Twitted feud. From name calling to whining, this Twitter feud is hilarious and sad. (Helga Esteb / Shutterstock.com)

Cobain apparently couldn’t take the seemingly self-centered tweet, and had to respond, “Oh shh. There are kids on earth abandoned & homeless who forcibly drink contaminated water because clean water isn’t accessible. Oh ya, not to mention, CANCER, famine, poverty, draught, disease, natural disasters, Death. [Explicit] Humans are so self involved . . . I’d like to thank my parents for providing me with a high IQ & I’d like to thank my grams for encouraging me not to be a self absorbed idiot.”

Cobain continued to slam Jenner on Twitter, according to The Huffington Post, saying things like, “rather be a scumbag than a [explicit] idiot. Praise high IQ’s, good taste & awareness about the state of the world.” According to Us Magazine, Jenner removed her tweet, which started the feud, shortly after Cobain wrote her reply.

After a few days of mulling it over, Jenner decided Cobain’s rude comments on Twitter couldn’t go without a response.

“An individuals feelings are relative to their environment. you don’t know me, you don’t even know what I was referring to. I am aware that I am very privileged and blessed, and I’m thankful for that everyday. I know there are greater problems . . . in the world. I pray for those people every night and give back as much as I can. So who are you to judge me?”

Jenner’s response was much more adult and dignified, than the slanderous and vulgar comments Cobain had been spewing.  Cobain responded with a plethora of comments, as reported by Entertainment Wise.

“Everyone’s problems are relative and I in [no] way meant to demean you’re issues but publicly complaining about how hard your life is, is completely self serving. It’s asking for attention.” Cobain didn’t stop there, “If you are feeling like [explicit] talk to someone who you trust as opposed to fishing for sympathy from your followers. I don’t know you nor do I think ur a bad person. I believe that venting about ones problems via the Internet is a blatant cry for attention.”

She finished her onslaught of rudeness by saying, “We all have experienced pain i try to deal w/ pain in a manner that pertains to my real life not in a way where strangers throw me a pity party. To each their own though man. It’s not my life, live it in whatever manner you want to.”

If Cobain truly believes this latest comment of her own, why concern yourself with Jenner’s original tweet at all? Publicly criticizing someone through a social network is a cry for attention, if I have ever seen one. One thing is certain, with days of waiting in-between Tweeted responses, this feud could continue for some time to come.