After saying goodbye to iCarly and Victorious in the last year, Nickelodeon is ready to bring forth it’s next crop of teen TV shows. Sam & Cat finally has a premiere date after months of buzz. Jennette McCurdy and Ariana Grande star in the show, airing June 8 2013 at 8 p.m. 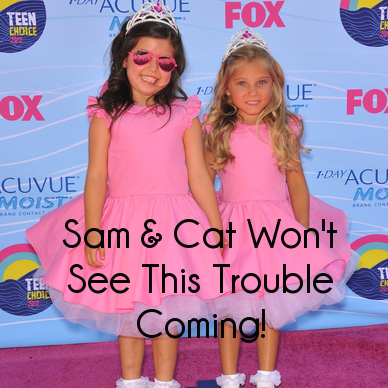 Yes, Sam and Cat are the same characters from iCarly and Victorious. Sam Puckett and Cat Valentine get thrown into a garbage truck together and are fast friends. An experience like that would unite you.

Sam and Cat move in together and babysit three little kids. The experience and craziness sparks the idea for Sam & Cat’s Super Rockin’ Fun-Time Babysitting Service.

Will Sam & Cat Work for Nickelodeon?

Cat Valentine (Ariana Grande) is a bit ditzy. I’m concerned about putting her in charge of children. She’s like the female version of Brick Tambland from Anchorman. Even more so, I’m worried Sam Puckett (Jennette McCurdy) would be prone to physical violence to enforce rules. Nickelodeon might have to make some changes to their character types in order to make this idea believable  The girls won’t have Carly or the Victorious kids to help them out of scrapes anymore.

While fans have Grande and McCurdy to look forward too, they also have Sophia Grace and Rosie. Ellen Degeneres’ favorite princesses from across the pond are guest starring in an episode as two little girls, Ruby and Gwen, that give Sam and Cat a run for their money.

During their episode, which will air this summer, Sophia Grace and Rosie play bingo and bring Sam to a rolling boil. Cat is her usual dippy self and doesn’t seem to think they are more than two little girls. Wrong. These singing powerhouses are about to cause some serious trouble.