In a strange turn of events, Shailene Woodley’s character has been cut out of The Amazing Spider-Man 2. Woodley had already filmed some scenes as Mary Jane Watson, a role originated by Kirsten Dunst. Sony recently announced that they have green lit Amazing Spider-Man 3 and 4. 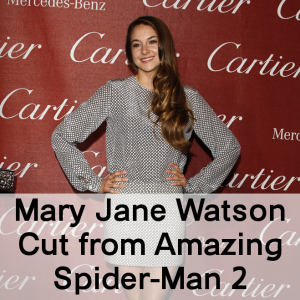 “I made a creative decision to streamline the story and focus on Peter and Gwen and their relationship,” said director Mark Webb. “Shailene is an incredibly talented actress and while we only shot a few scenes with Mary Jane, we all love working with her.”

Shailene Woodley was disappointed to hear about the cuts. She wrote in an email to EW, “Of course I’m bummed. But I am a firm believer in everything happening for a specific reason… based on the proposed plot, I completely understand the need for holding off on introducing [Mary Jane] until the next film.”

Woodley’s series Secret Life of the American Teenager recently wrapped on ABC Family, but Shailene has been throwing irons in every fire she can find. She’s set to appear in The Fault in Our Stars, Divergent, White Bird in a Blizzard, and The Spectacular Now.