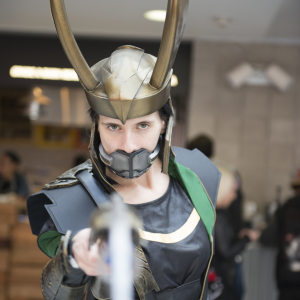 The charming Tom Hiddleston, dressed as his character Loki from Thor and The Avengers, surprised fans at Comic-Con in Hall H on Saturday. Nando Machado / Shutterstock.com

While we were crushed to hear that Tom Hiddleston won’t be back for The Avengers 2, Comic-Con gave us something to hold on to. That is, Loki in person. Hanging out. And bringing footage of Thor 2. This is just perfection.

The Marvel panel took place Saturday night in Hall H with around 6,500 people in attendance. He soaked up the screams from fainting female fans and gave us a bit of his signature Loki charm. He questioned where the Avengers were and struggled to keep in character. The fans were shouting things that no one really could hear on the video, giving us just another reason to be at Comic-Con. Apparently, every fan in Hall H would defect to Team Loki. He told everyone to pledge the allegiance to him and he would give them what they wanted.

Unfortunately, that wasn’t a Loki strip tease. Fortunately, it was new footage of Thor 2. Later, fans got a teaser trailer for The Avengers 2: Age of Ultron.