The entire world is doing a head desk right now. I’m sorry to report that Kim Kardashian and Kanye West may have named their first born daughter “North West.” 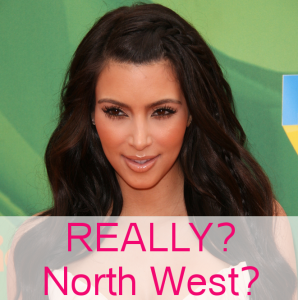 Why Does It Matter That Kim Kardashian Named Her Baby North West?

Here’s why this name really upsets me. First, Kim Kardashian is a mega star. Whether you like it or not, the media followed her every move for the last nine months. She complained about gaining weight, carried a person inside of her for nine months, and then had the opportunity to bless her with a gorgeous name worth of her famous parentage. And she named her child after a direction.

Second, we’re going to have to hear this baby name for the rest of enternity. Kim and Kanye aren’t exactly low profile people. We’re going to be hearing about North West more than Blue Ivy.

Third, North West is going to be teased, mercilessly. It’s already happening. I’m sorry to admit that this article pretty much teases her. None of us want to, but because of her name it just happens.

North West will be nicknamed “Nori,” which was the name of my college roommate’s dog. Seriously, Kim! Why? You tortured your feet with ridiculous shoes and flaunted a very pregnant bikini belly for months and then give us “North West?” I thought you’d do so much better.

Maybe Khloe has dibs on all of the good baby names? Anyway, Kim has not tweeted her baby girl’s name or posted anything about her on her official website. Until the announcement from Kim, I’m holding out hope they chose Kai or Kaidence. That was a beautiful name worthy of this gorgeous baby.